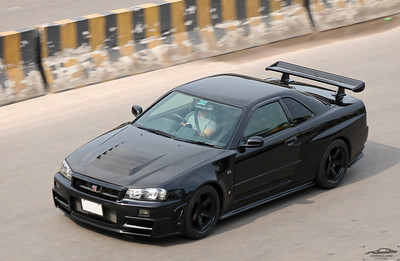 The Nissan Skyline is one of the coolest cars ever built.

It’s 2002, my friends and I are 13 years old. We’re sitting in the theater watching 2 Fast 2 Furious. As we are sitting there listing off all the cars, one stood out to us most of all. We couldn’t figure out what it was, but it was driven by Paul Walker’s character. We spent most of the movie taking wildcard guesses at to what it could be. Smartphones weren’t invented yet so we couldn’t just have an immediate answer. When we got home, we hopped on the internet (still running on dial-up) and found that it was a Nissan Skyline GT-R 34 and we would never ever get to see one in real-life.

The Nissan Skyline In America

The United States put strict regulations on the safety and emissions standards of consumer vehicles. This meant that anyone looking to be “the first kid on the block” to have their dream car was severely limited to specific make and models. One of the largest reasons the Skyline never hit the US market was simply because Nissan didn’t have the exportation of the car in mind when they developed it. In order for a vehicle to be rated and analyzed in the US, 4 must be sent for crash testing and emissions rating. Nissan simply didn’t want to crash 4 of the most beautiful cars in the world.

Where US vehicles are designed with the driver on the left, the Skyline was developed with the driver on the right. The amount of money that would be invested into redesigning the vehicle would have been astronomical, and seeing as how the intent was not to export it, Nissan didn’t give it much afterthought. As for why they decided to go with a right-hand vehicle, I still don’t know. I can’t find out, and it sucks.

In the past, cars were largely imported at a significant discount in order to avoid retailer mark-up. Someone looking to purchase a car used to be able to go overseas, test drive the vehicle, then purchase it and pay to have it shipped back home. This would still (most of the time) come out as a cheaper alternative than purchasing a vehicle from a dealer (who would mark up the price). The US Government didn’t see this as a viable (or legal) option for consumers and they wanted Americans to purchase from American dealers. Thus, creating the safety and emissions standards discussed above would bottleneck “car guys” into purchasing only the coolest cars that the Government deemed cool. Sorry guys.

Nissan Skyline Was Too Powerful for US Roads

Going back to 2002, online forums of the time had pointed out that the Skyline was too powerful for US roads. That was more than 15 years ago, and back then it was true. A twin-turbo supercharged RB26DETT engine meant it could outrun any Crown-Vic and could easily blow away most other cars for its time. It pushed out approximately 275 horsepower, but throw in the nitrous tanks that Paul Walker had in the movie and you had something that nothing could catch. That was back in 2002. Today’s Skyline features a whopping 600 horsepower engine. This does confirm that the US doesn’t want vehicles that are greatly faster than its own police force on the road.

Is Comp-Only Insurance the Right Car Storage Insurance for You?

Who is Responsible for Damaged Cargo?