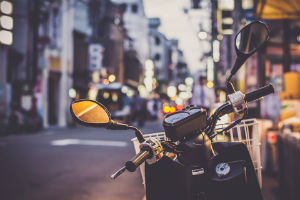 NORTH HOLLYWOOD. California – A woman in a vehicle struck and killed a motorcyclist in North Hollywood. Additionally, the incident occurred on Thursday morning.

Los Angeles Police Department Lt. Lisset Fuentes said they responded to the crash after a call around 5:30 a.m. Specifically, the accident happened at the intersection of Vineland Avenue and Vanowen Street. Moreover, this happened at a red light.

Furthermore, witnesses at the scene described the incident in further detail for police officers. They claimed to see the motorcyclist stopped correctly at the light. Then, a red Audi speeding southbound on Vineland Avenue struck the motorcyclist.

Fuentes added that the motorcycle was flung several hundred feet past the initial site of the crash.

Astonishingly, the red Audi continued to speed southbound after the incident. Then, the Audi crashed into multiple vehicles that were parked and unoccupied.

However, the Audi collided with a white SUV with such force that the SUV turned over into the street.

Investigators on the scene are not sure how fast the vehicle was traveling at the time of the incident. However, Fuentes reported, “To cause all this … it had to be at a pretty significant high rate of speed”. Then, he added that officials were holding a woman in connection with the accident.

Currently, officials have not reported whether drugs or alcohol were a factor in the crash.

A truck driver has been accused of multiple murders. From “Large -Marge” from Pee-Wees Great Adventure to the “Joyride” franchise, truck drivers have a haunting stipulation about them. Well, sometimes the horror of the big screen comes to life. Barry

Flouting stay at home orders implemented by Governor Gavin Newsom to stem the spread of covid-19, protests gathered crowds in Huntington Beach and downtown Los Angeles to demonstrate their opposition to the executive order. The two separate but coordinated protests